ow to DIY a 4 bit Magnetic Core Memory for Rpi?

How to DIY a 4 bit Magnetic Core Memory for Rpi?

This morning I felt jealous to read iProgrammer that a guy has made a core memory for Arduino only.

I also want to DIY a Rpi version, of a very small core memory, only 4 bits.

I am now searching my junk box for 4 magnetic beads.

I think I can use DC current, perhaps 1 Amp horizontal, 1 Amp vertical, adding up to 2 Amp, to magnetize one core of a 2 x 2 matrix of 4 magnetic cores, thus writing one bit into the core.

But I forgot how to read back the bit! 🙂

I am tied up with other projects and have no extra time to google. So I am asking if anyone interested to give me some guidance. 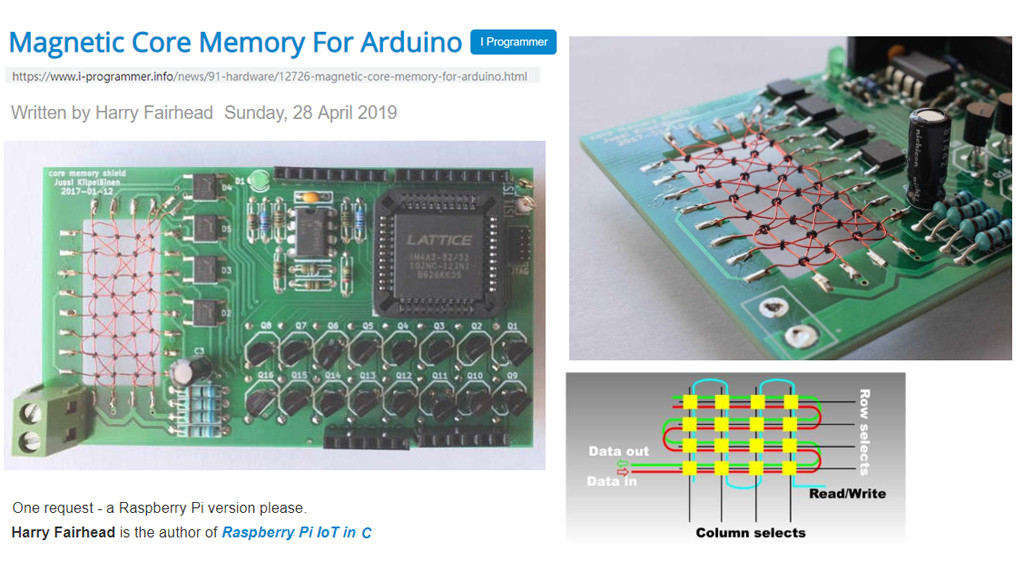 I found these cheapy things on the old cables in my junk box, not sure if each core can do as one bit of memory. 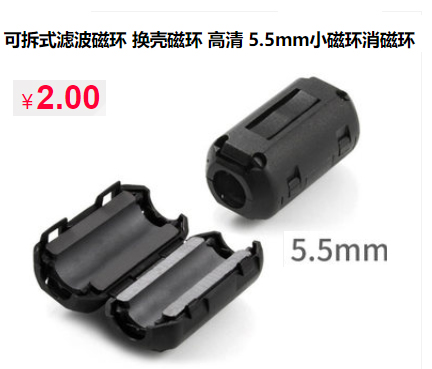 Now I found more magnetic cores in my junk boxes. Once I used those 100 uH cores to assemble switching power supply with LM2956. But now the assembled modules are so cheap, it is a waste of time DIY. Anyway, these left over cores are ideal to use in the project I am now proposing

Nope, not a misprint – it really is core memory and it really works, even if it is only 32 bits!

There is no good technological reason for the creation of a core memory card for the Arduino – or if there is I can’t think of it. Basically this is a trip down memory lane, a history lesson and a demonstration of how computer memory works.

Magnetic core memory works with an array of magnetic cores threaded onto an x, y grid of wires and a read/write line is threaded through all of them. The addressing is done by activating the row and column line that selects the core you want to read or write and then using the data line to read or write the magnitization of the core.

The only real advantage of core memory is that it keeps its data when you remove the power. This means that computers of old could be switched off and when you switched them on they continued from where you left off.

Jussi Kilpelainen has put together a 32-bit demonstration of core memory and you can buy it as a kit for $39.90. The really good part is that you can see the core assembly clearly displayed

Please note that this is a kit, so you will have to solder. What is really surprising is that it uses a CPLD – a Complex Programable Logic Device. This is supplied pre-programmed in the kit, but you can download the VHDL code to get it to do the job from the website. Personally I would have used some logic gates to do the job but each to his own design decisions.

I can imagine lots of ways that this could be used to explain basic ideas of memory and it would make a good addition to any museum or training course. It would also look good on display. But is there a real use for 32 bits of magnetic memory?

In the beginning, Ampex Ferrotec produced magnetic core memory for computers. Its clients were mostly European or Japanese electronics enterprises.

With 3,800 workers at its prime, the company was an industry leader in terms of both production and management.

It was renowned as the “capital” of Hong Kong electronic industry because it had trained a lot of specialists.

In the early 1970s, Ampex Ferrotec set up an engineering departments designing magnetic core memory, stack, … . It developed new products for clients in the Far East, Europe as well as America.

In the late 1970s, Ampex Ferrotec began developing hard discs and audio/visual electronic products, at the same time introducing foreign high-tech products such as the Rodime Winchester Drive from Scotland and Sony Betacam from Japan.

This raised the bar in Hong Kong’s local electronic industry. After the 1980s, Ampex Ferrotec started to lose its technological advantage and was overtaken by its competitors such as Intel, Fairchild and Sony. Finally, the factory was closed in the mid-1990s.

In still the poorest district Shamshuipo I am still living, there are schools with hackers club, would be busy making robot buggies etc. So I might ask them to help doing the core memory project.

Many of the grandmothers of the school children were once upon a time workers in the magnetic core factory in the same district.

In those were the days, many 12 year girls living in the wooden hut slum a couple of streets away, would borrow their older cousins’ ID cards to pretend to be 14, so could start working in the prestigious factory as “microscope girls” knitting core memory stacks.

Only girls with very very sharp eyes and very sensitive, steady hands, could do the job under the microscope for long hours, three shifts a days, 6 days a week, only 6 extra public holidays in the year (lunar new year, mid autumn, dragon boat, grave sweeping). Some did work 7 days a week for more money.

One or two year ago, I heard BBC World Service that some of the magnetic core memory systems are still working (yes, still) after 30+ years, in the space ‘ships’ doing bits and bytes reading and writing, day by day, without losing a bit, … 🙂

Fast forward 30 years, those pretty sharp eyes are getting very dim, pretty skillful hands too trembling to hold the chopsticks, waiting in yearly long queues of public hospital eye operation they could only afford.

The sharp eyes were once sharp, but most of them could not never read, because they left school before 10, saving money for their brothers to school, … Of course they never knew what kind of beads they were knitting those years.

But now their grandchildren have a chance to knit a small memory stack as their grandmother’s birthday present, explaining to the old ladies what is a memory stack, and that the bead nets they knitted 30 years ago are still in the space, working as hard as ever, …

Sorry for the typos, my eyes are getting a little bit waterly, so I stopped here, …