Radio Telescope to Listen to Meteors

The Perseids are a favorite meteor shower of many Northern Hemisphere skywatchers, especially during the mild summer nights of August. But if you can’t get outside or if you’re clouded out, you can still listen to the meteor shower any time of day using a simple FM radio.

Meteors are caused by small bits of dust and rock from space hitting the Earth’s atmosphere and burning up upon entry, producing a flash of light. Earth gets hit with approximately 40 tons of this stuff a day on average, but that increases during a meteor shower event as the earth goes through a stream of debris left behind by a comet (in the case of the Perseids, it’s Comet Swift-Tuttle).

Close Your Eyes and Listen to the Night Sky

When that little bit of natural space debris burns up in the atmosphere, it flashes briefly, creating a “shooting star” to marvel at if you have clear, dark skies. It also briefly leaves a trail of charged particles behind. Turns out, those charged particles can reflect radio waves from distant television and radio stations, temporarily boosting their signal from afar. These radio waves are what you can detect with a simple radio receiver.

The best way to do this, as described here, is to get a hold of an FM radio receiver with a good antenna. Your car radio is a great example. Although it is recommended that you modify it a bit or buy a high-end radio, you can try this with a small home radio as well.

Now you have to find a mostly blank spot on your radio dial. You shouldn’t be tuned to a nearby station, but one that you can just barely make out because it is very distant. Then listen closely for a jump in the station’s power—that indicates a meteor has passed overhead! This works best at night when there is less interference from human-made radio signals, and early in the morning hours when the earth is facing into the stream of comet debris. If you just want to tap into the observations from some really large receivers, you can tune into SpaceWeatherRadio’s streaming service.

Meteors aren’t the only things you can observe with bits of equipment you might have at home. With a leftover satellite dish and some parts from your local electronic store, you can build an Itty Bitty Radio Telescope to observe the sun. You can put one together using an RV kit, or check Craigslist and Freecycle for people who are just looking to get rid of old equipment. In the one I recently put together for a kids’ summer camp, I used a satellite finder that emits a sound that gets higher in pitch when it comes across a strong radio source, such as the sun. Don’t get confused by the sounds, however.

Radio waves emitted from the sun or any astronomical or human-made objects are light, NOT sound. It’s our electronic equipment that converts the information to sound that we can hear. (You can learn more about “sounds” from space in this SciFri article.)

How you build your Itty Bitty Radio Telescope depends on what equipment you get. I picked up an old Channel Master 1004IF on eBay to detect the signal collected by my dish.

That doesn’t have its own power supply, so I followed these instructions for making my own with some wire, coaxial cable, batteries, and a soldering iron. (If you don’t already know how to solder, there are maker and hacker spaces popping up all over the place giving lessons!) Once the system was all connected and powered, I was able to detect my first radio waves from the sun on a cloudy day! Some people mount their Itty Bitty to a tripod, and others build a “Lazy Susan” for it to rotate on. Mine is still “handheld” while I dig up some more parts. In addition to observing the sun, this is a great educational tool to show how just about everything around you gives off a few radio signals, and there are even classroom lessons to help you do just that.

If you enjoy these DIY projects, you may want to dig even deeper with a group called the Society for Amateur Radio Astronomers. You can’t buy a ready-made radio telescope for home use in the same way that you do for optical telescopes. Instead, many astronomers build their own set ups to observe the sun and molecular clouds in the galaxy, and even to take up the search for extraterrestrial civilizations.

The universe makes itself known to us over a wide range of types of light. You can access the radio universe, too, with some simple home equipment. Whatever method you use, however, I hope you have fun meteor hunting this week! 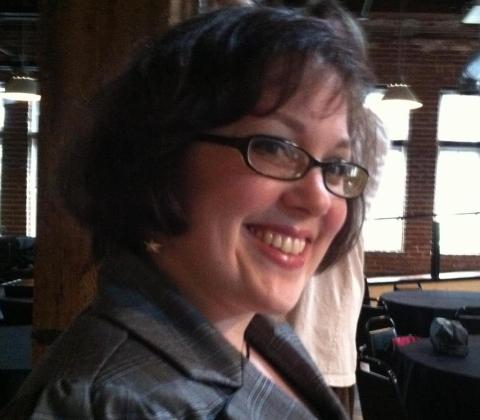 Nicole Gugliucci is the informal education lead at CosmoQuest and a post-doctoral researcher at Southern Illinois University in Edwardsville, Illinois.