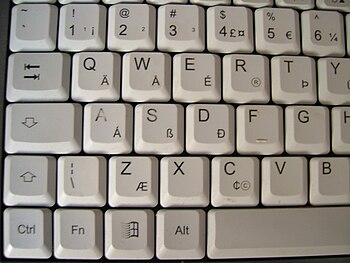 “¿” is available in all keyboard layouts for Spanish-speaking countries.

Windows users with a US keyboard layout are able to switch to the US-International layout. Among other changes, this converts the Alt key to the right of the space bar into the Alt Gr (graphics) key. (The left Alt key remains unchanged.) When the right Alt key is held down and other keys are pressed, the combination produces other characters not found on the standard US keyboard. For instance, the keystroke right Alt+1 produces an inverted exclamation mark, while right Alt+/ yields the inverted question marks.

On a US International keyboard, the “¡” and “¿” symbols can be made the same way as a described for Microsoft Windows, namely by pressing right Alt+1 and right Alt+/, respectively. Many programs also accept Unicode code point entries, which can be entered with any keyboard setting so long as the target software supports the feature: press Ctrl+⇧ Shift+u, type A1 for “¡” or BF for “¿”, and press enter to confirm. A1 and BF are the hexadecimal Unicode code points for the given characters and any character can be looked up in the Unicode table and written this way.

On the X Window system (which the vast majority of GNU/Linux desktop systems with graphical interface use), they can be entered using the standard Compose key mechanism as Compose+!+! and Compose+?+?, respectively.